During the weekend, I wanted to spend some time brushing up my web appsec skills and decided it would be a good idea to try some CTF challenges. One of the interesting CTFs that was running this weekend was VolgaCTF so I decided to give it a go.

There were several interesting challenges but my favourite was UserCenter. The description of it was Steal admin's cookie giving a clue that the type of vulnerability may be an XSS.

Getting familiar with the portal, there were 2 main functionalities that could be abused to trigger an XSS:

The request that was updating the profile contained the base64 encoded content and the MIME type of the uploaded file:

If the edit was successful, the file was uploaded to the static subdomain. The plan was to upload a file that could allow me to trigger the XSS like a HTML file but it wasn’t as straight forward.

Trying to upload a html file the request failed with the Forbidden MIME type error. Since the html file was blocked, I tried uploading an SVG (Scalable Vector Graphics) file to trigger the XSS. This failed as well since any content type containing xml/html was getting blocked.

After doing more research on possible content types I could abuse, I decided to try */* and see what would happen.

The file was successfully uploaded as was indicated by the response below:

Even though the file was uploaded successfully, it was still unknow how Firefox would parse this file type.

To my suprise, Firefox parsed it as a HTML even that the X-Content-Type-Options header was set to nosniff allowing the execution of arbritary javascript on the static.volgactf-task.ru . 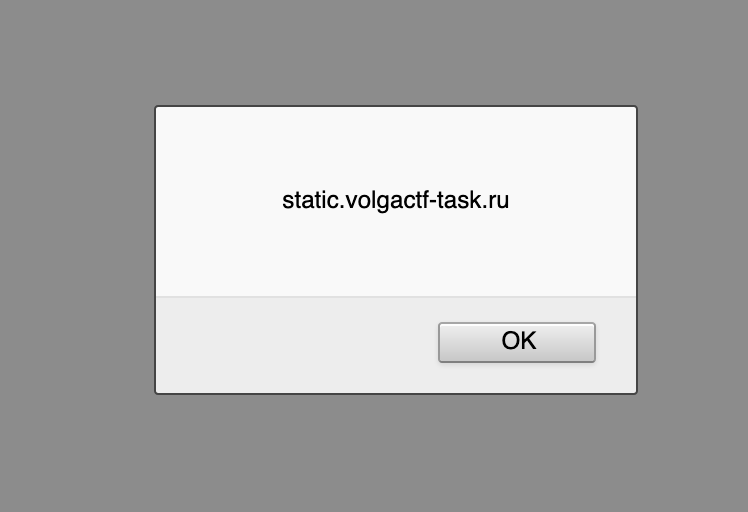 At this point, I decided to build a cookie stealing payload and send it to the admin using the report bug feature. I wasn’t expecting it to work as it was too simple to be true.

I received the request, indicating the XSS was triggered but there was no cookie. At that point I assumed that the cookie was not on the static.volgactf-task.ru but on the main domain.

With this information, I decided to poke around the web application more and see if the thing we achieved could be useful in abusing or finding any other vulnerability.

On main.js the following part of code was really interesting:

When the web page was loaded, it was getting the api_server cookie value which by default was api. This cookie was pretty important as it defined the subdomain hostname where most of the requests get sent. For example, the user details our downloaded from the API:

Having control over the api variable (initialized by the api_server cookie) means that we can trick to send the requests on one of our controlled hosts. To bypass the subdomain restriction, you could specify the following value on the api_server cookie : test.com/ When used on the code, it would turn to //test.com/.volgactf-task.ru/user, sending the requests to our test.com server.

If you paid attention to the code snippet that was setting the api_server cookie, it passed the value through the replaceForbiden function. This function would remove all the characters that could be used to break out of the subdomain restriction mentioned earlier.

This filter could be bypassed easily by providing the following value: "test.com\x8F" . The last part of the filter would replace any character that wasn’t on the [^\x00-\x7F] range with a ?. When passing the above value, the URL would become test.com?.volgactf-task.ru/user giving us full control over the hostname the requests are sent.

Since I already had javascript execution on a subdomain, I could create a new cookie and define my own API server. The domain attribute of this cookie would be .volgactf-task.ru meaning that it would be set for all the subdomains including the main domain. To demonstrate if this was possible I executed the following command from the static.volgactf-task.ru domain context:

Running Cookies.get("api_server") on the main domain confirms the cookie was polluted and the API domain contains our own host:

Having control of so parts of the application but no straight way to turn this on an XSS. I tried several things that failed which I’m not going to describe here as this blogpost is long enough. After considerable time poking around and failing, I decided to research for any functions I could abuse to turn the data returned from the api on an XSS.

I discovered the following issue on Github: 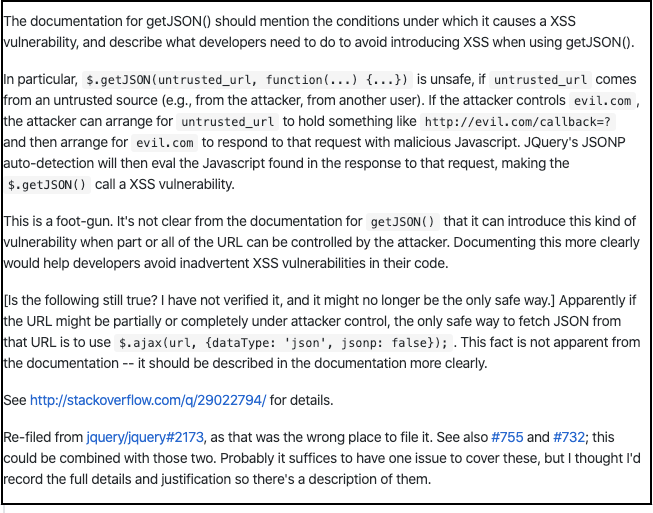 To verify the theory, I hosted the following js file : ({"pwn":""+alert(document.domain)}); and called getJson by specifying jsoncallback=? in the URL.

With this information, the attack to steal the administrator cookie was as following:

Another problem was that I had partial control on the URL because of the filtering in place. To trigger the XSS I had to specify the jsoncallback parameter, which at the current situation wasn’t possible. I decided to further investigate the code and see if there was any place where I could control the END of the URL and I discovered the following code:

The guid variable was initialized on page load from a GET parameter passed on the URL:

Having control over the guid parameter, I could set its value to &jsoncallback=? and JQuery would parse the response as javascript.

Having all the missing pieces of the puzzle, the following steps were used to complete the challenge:

Following the above steps, I received the flag on my web server logs , successfully completing the challenge:

Introduction Applocker is becoming one of the most implemented security features in big organizations. Implementing AppLocker reduces your risk dramatically ...